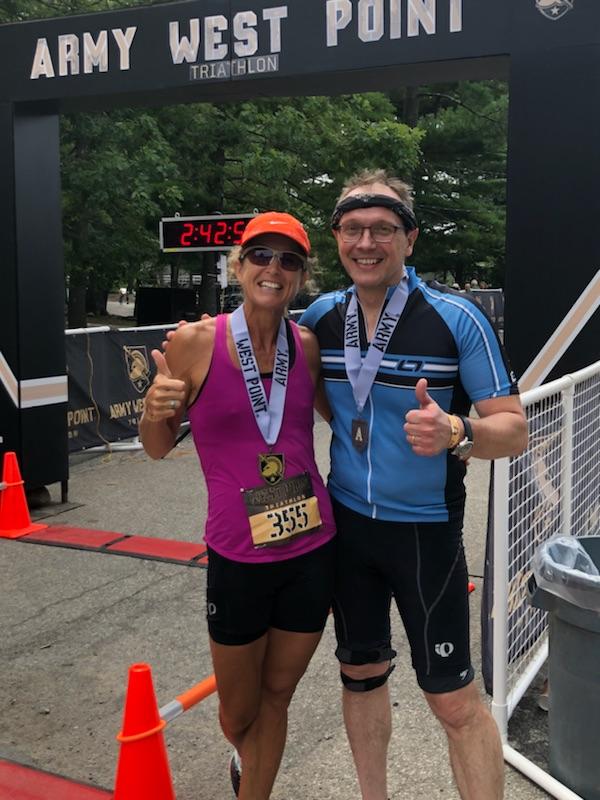 For the Wellness in the Schools leaders, the end of summer means an end to the triathlon season where they each spent many hours swimming, biking, running, and competing…successfully. As we are now well into the hustle and bustle of the new school year – with over 140 schools in 4 main markets (gulp) –  they leave behind a very active summer. A summer that perhaps got them in shape for what was to come this school year.

Nancy is not new to the triathlon scene – she was an age group competitor in the years immediately following university, where she was still seeking that same thrill of competing that she enjoyed in college. For those new to the triathlon world, a triathlon is a race that includes a swim, a bike and a run, in that order. Each race is a different distance – from a sprint to an Ironman distance (the Ironman is a 2.4-mile swim, 112-mile bicycle ride and a 26.22-mile run, or a marathon!).

Nancy entered her first triathlon in 1992  and competed in an Ironman in 1998. Soon a career, a family and life took over, but she maintained a healthy lifestyle and decided to get back into the competition two years ago. She picked up immediately where she left off – winning her age group. This summer, Nancy landed back in the water and on the roads and fulfilled an 18 year dream – to compete in the NYC Triathlon – a race with over 7,000 competitors. She clearly recalls the first year the race was held here in NYC, “I was 4-weeks pregnant with my first child and one of my closest friends entered the race. As much as I wanted to join her, I was nervous about competing. I waited 18 years to do this one.” And, the wait was worth it. Nancy not only won her age group, but was also the 38th woman overall, beating athletes who were half her age! “Whether we like it or not, our ages are written on our legs. While on the bike, I somehow thought it was fun to ride past a 25-year old and tell him that I could be his mother. I guess I just have many more years (and miles) on the bike!”

The highlight of the summer triathlon season, however, was the West Point Sprint Tri where Nancy met up with WITS Executive Chef Bill Telepan and Union Square Events Executive Chef John Karangis. This group certainly sets a high standard for what it means to stay healthy – Nancy once again crushed her competition. Perhaps inspired by his over-achieving partner, Bill took on the triathlon challenge and trained with his daughter Leah for West Point. After being on his feet all night, he would get up to train in the summer heat before going back to prepare lunch for his many diners. Bill explains that since his job is so physical he needs to stay in shape. He loves the triathlon training “because it changes everyday, so I never get bored. Plus it pushes me because there is a race at the end. I loved training with my daughter this summer because we got to spend a lot of time together.” Indeed, both Nancy and Bill remain a constant inspiration and role models to not only the many children whom we serve, but also to our adult team of chefs, coaches and change-makers.

But Nancy says she works out to stay happy as much as she does to stay in shape (often the two go hand in hand). She works out to meet up with friends and gets to do both at once. “I was lucky this summer to ride with two amazing girlfriends and strong cyclists. Before we knew it, we had gone 25 miles and had solved all of the world’s problems (or at least our own).”

We no longer harvest tomatoes. We no longer eat chilled cucumber soup. We now get pumpkins and peppers. In the same manner, our workouts change with the season. Nancy is back to running in Central Park, meeting up with good friends and maybe doing a little yoga in her living room on a rainy fall day. Bill sticks to the gym. Regardless, they remain in shape and healthy and ready to continue this fight to end childhood obesity…and to take on any challenge that the school lunch/recess revolution puts in front of them.